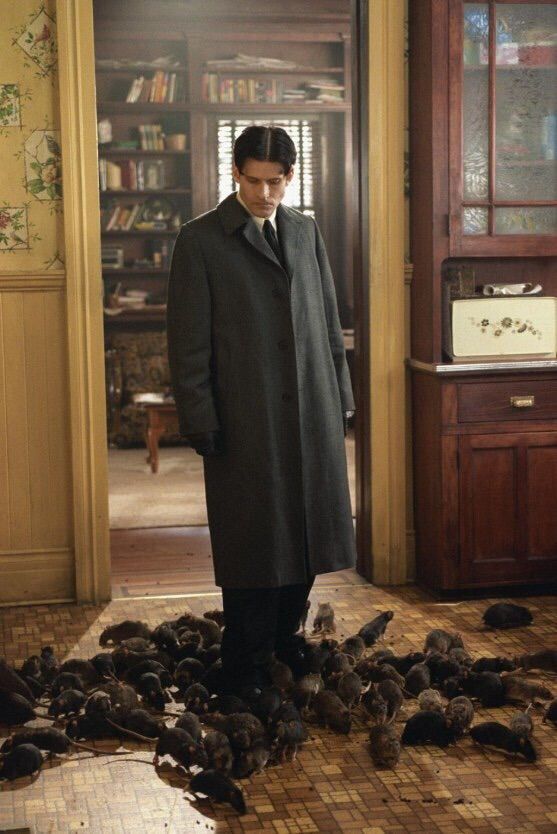 I usually don’t race out to see horror films, but upon hearing that rats were the centerpiece of Glen Morgan’s 2003 film Willard, I was enticed enough to branch out of my cinematic comfort zone. This movie is a remake of a 1971 film of the same name. I chose to review the remake because Rotten Tomatoes gave it a slightly better score. I also hoped that Crispin Glover, the films lead, would live up to his cult hype.

Willard’s opening title sequence features a haunting orchestral score and horrific rat themed animations which had my stomach churning with an anticipatory throb. The sensation was so overwhelming that I had to press pause and caress my navel with a feather duster. I usually only do this after overindulging on a large meal, but I had not eaten much that day, and was perplexed as to what could spawn such a feeling within my gut. Perhaps it was the jarring images of rat skeletons contorting on the screen like animatronic demons. I couldn’t bear to sit through another melodramatic display of rats being portrayed as ghastly pests. I feared that this might follow in a similar vein to Alfred Hitchcock’s The Birds, where birds are presented as soulless killers. Rats do in fact have souls, and all rats go to heaven. I am happy to say that my most of my initial reservations and physical illness faded as I continued onward into the film.

Crispin Glover plays Willard, a mentally troubled man who lives with his sick verbally abusive mother in a dilapidated mansion. He is the cliched Norman Bates archetype complete with the pale and gaunt look. Willard discovers that he has a colony of rats living in his basement. Initially he tries to kill the rats, but finds that he does not have it in himself to do the deed. He forms an emotional connection with one rat, which he names Socrates. Through his relationship with Socrates, Willard finds that he has the ability to control rats. They follow his every command. Willard then uses his powers over rats to exact revenge over the people in his life that torment him. He even goes so far as to murder his boss using the rats. During the course of the film, Willard demonstrates favoritism toward Socrates and treats the other rats, such as Ben, unfairly. Willard calls Ben fat and even tries to pummel him with a cain. When Socrates is killed by Willards boss, Ben takes control of the hoard rats and turns on Willard. They attempt to try to nibble him to death. Willard survives the rat attack, but is found responsible for the murder of his boss. The movie ends with Willard sitting out of his mind in a mental institution.

I was truly at a loss for words during and after this film. My feelings on it are mixed. The film succeeds at creating a chilling and macabre atmosphere, but there is not much substance to live within it. The characters are shallow and underdeveloped. Willard is a sociopath, but not of the likable variety, such as Christian Bale in American Psycho. I found nothing in this performance that I could connect with. R. Lee Ermey, on the other hand, is an excellent casting as Willard’s Boss, but still the film leaves the viewer with no one to route for and leaves the reviewer with nothing to praise. The most redeeming elements of the movie are the soundtrack and the rats.

During a scene where the mob of rats kills a cat, a song called “Ben” Plays. The song is from the sequel to the original 70’s version of Willard, which is also called “Ben”. I made a mental note to look up the song upon first viewing because the loving ode is in such stark contrast to the killing that is takes place on screen. It creates tension, and makes for a very creepy scene. I was stunned to find out that the song was sung by Michael Jackson and written specifically for the “Willard” sequel. It is sung from the perspective of a boy talking to his friend rat-friend Ben and telling him how happy he is that they are together. It might be the best song ever sung about a rat.


Because this is a rat-blog, it must be noted that the performances by the rats were breathtaking, absolutely Oscarworthy. The rat who played Ben stole the show. For this role they cast a Gambian Pouched Rat. He was so cute. I was looking into adopting or purchasing a rat of this variety but unfortunately they are illegal where I live. He was able to convey emotion excellently, which helped to drive the plot of the film. The film makers made a huge mistake by not listing the rats in the credits. This film would not have been possible without them, yet they are not listed anywhere. They deserve just as much recognition as Crispin Glover, if not more. Also there was several lines of dialogue where the terms “rat” and “mouse” were used interchangeably. The average person might not be bothered by this, but us in the rat community take offense. There is many differences between mice and rats. If you are going to make a film about rats, please do your research. I give this film a B-. It wasn’t the best, but it has rats in it. Anyways, love you guys. Say hi to your rats for me.